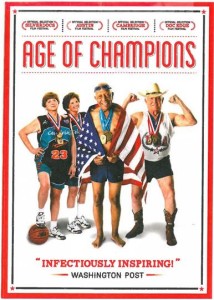 Age of Champions is the inspiring story of a group of athletes—a 100-year-old tennis champion, 86-year-old pole vaulter, team of basketball grandmothers, and a pair of swimming brothers—all chasing gold at the National Senior Olympics. The film captures the triumphant spirit of these competitors as they tackle the challenges of old age with grace, humor, and optimism.

Age of Champions made its world premiere at the 2011 Silverdocs Film Festival and was heralded by the Washington Post as “infectiously inspiring.” Athletes featured in the film have received wide attention from the national media, including NBC Evening News, CNN, The Regis & Kelly Show, ABC News, NPR, and a cover story in Washington Post magazine.  (Visit www.ageofchampions.org for more information and to view the trailer.)

“Age of Champions shares an important story that life should be celebrated at any age,” says film producer Keith Ochwat. “We are honored to partner with MonteCedro as we share the film with communities across the country.”